Each NFL season something bizarre happens. No, I am not talking about Vinny Testaverde returning for the umpteenth time, nor am I referring to another Oakland Radiers meltdown. Almost yearly, and usually out of nowhere, a hero arises from the depths of the free agency slime pool to carry his team to fantasy football greatness. Such a hero has no value entering the season and becomes an absolute bust in the following one, but for those few weeks leading into and during the fantasy football playoffs, they are gods of the gridiron.

With the majority of fantasy football leagues either entering their final Sunday of regular season play or beginning their first round of playoff match ups, its time to look back on the best obscure free agent pickups of the past five seasons who rewarded their owners with outstanding fantasy performances

The undrafted free agent from Note Dame took the reigns from second-round bust Brandon Jackson midway through the Packers season, and made the most of his opportunity. In the season’s final eight games, Grant rushed for 770 yards and 8 touchdowns, averaging 5.5 yards per carry during that stretch. Better yet, during weeks 14-16, most fantasy football leagues’ playoffs, Grant averaged 110.3 yards per game and tallied a touchdown in each contest. Those numbers earned Grant a contract exension in the off-season, and legendary status in the eyes of the fantasy owners that rode his success to a championship. 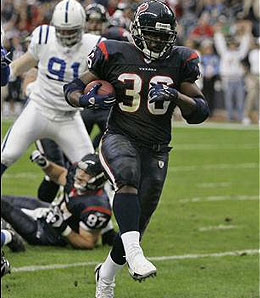 The former “thunder” to Tiki Barber’s “lightning“, Daynedid not make much noise at all following the 2002 season. Rushing only 105 times over the next three seasons with the Giants and Broncos, the former Wisconsin Badger found the endzoneonly twice during that span. After signing with the Texans for the 2006 campaign, Dayne cemented himself as a fantasy football savior when AhmanGreen went down with an injury. What happened next, no one could have predicted. In four December games, Dayne rushed for 429 yards and 5 touchdowns, including a 32-153 and 2 touchdown performance on Christmas Eve against the Indianapolis Colts, sealing the deal for some fantasy championship hopefuls.

The ultimate fantasy spoiler, the seldom known bowling ball from Liberty barrelled into the mainstream with 2005 Rookie of the Month honors for November, after piling on 4 tds. Taking over the Packers starting running back job from Tony Fisher, Gado continued his surge into weeks 12, 13, and 14 of the fantasy season, averaging 119 yards during that span, helping many owners make the playoffs. Sadly, however, Gado sprained his MCL in week 15 against the Baltimore Ravens ending his season, but not before becoming one of the most surprising fantasy stories ever. Not bad for a guy who only started two games in his collegiate career.

The third non-drafted free agent on the list, Volek too entered into the spotlight due to an injury ahead of him on the depth chart, rising to the occasion in the wake of a Steve McNair injury. In a three game span in weeks 13 to 15, Volek amassed an incredible 1,187 yards passing, tossing 11 touchdowns to just 1 interception, and adding 1 rushing touchdown to his credit. At the time, Volek was just the 4th quarterback in NFL history to throw for over 400 yards in back to back games (426 and 492 in weeks 14 and 15). Volek crashed and burned the following week (111 yards, 2 interceptions), however by then the damage had been done.

The self-proclaimed S.O.D. (”steal of the draft”) following his 4th round selection to the Minnesota Vikings in 2003 went almost universally undrafted in most fantasy football leagues. Justifiably so, he averaged less than 5 carries per game through the seasons first 12 contests, leaving him off most g.m.s radars for what was to come next. In fantasy playoff weeks 15 and 16, Smith came out of nowhere to put up back-to-back 145+ rushing yard efforts, notching 3 touchdowns and his place on this list. Smith’s two week success did not pan out long term though, as the S.O.D. was soon turned over to the D.O.C. following an airport raid of his luggage which revealed a Whizzinator and dried urine, presumably to be used to beat the NFL’s substance abuse test. Like the rest of his NFL career, the ploy failed and Smith was never seen on the field again.

As for this year’s Samkon Gado? Well, he’s likely still available in 99.9% of all fantasy leagues, but I still wouldn’t recommend signing him. His time has past. No, this year’s hero will likely be someone you’ve never heard of, have a funny name, or an XFL alumni. Or all three. Regardless, judging by the results of years past, it will be impossible to pick out this year’s Grant or Volek. My lone solution? Sign early and sign often, and hope that one of your scrap heap heroes will pan out. I’ve got dibbs on Xavier Omon.

Kyla Smith-Brown - Mar 28, 2018 0
There are so many advertisements for events around campus, it can be hard to keep up with it all. "Whats Up Huskies" is a...