Lance Armstrong has beaten it all but he did not beat the rules in the end. Lance Armstrong is said by many to be the best competitive cyclist of all time, but did performance enhancing drugs get the best of this athlete? This man has beat the odds many times with catching first places in many events and beating stage three of  testicular cancer. He even made a mark on the sport by winning the Tour de France seven times in his career, making it the most wins in cycling history. An anonymous student at Bloomsburg said, “I think Lance Armstrong is a hero, he has beat cancer and come back to the world of cycling and hit it with all he has. I think he stands as an American hero, and everyone should look to him as this and try to be like him.”

In the sports world of cycling, when using performance enhancing drugs they call it doping. Armstrong has been accused in the past of doping and has said to have taken 600 drug tests over his career and has never tested positive. The U.S. federal prosecutors pursued allegations of doping by Armstrong from the years 2010 to 2012. On Feb. 2, 2012, the prosecutors officially dropped the criminal investigation on Armstrong without any charges. He has denied these allegations throughout his whole career until recently in Jan. 2013, Armstrong admitted doping in an interview conducted on television by Oprah Winfrey.

After this point he was seen as a stained athlete by using performances enhancing drugs to win. The questions came about why did he do this now? Is he planning something? What’s his reasoning for coming out and saying this now of all times. Thomas Clea had this to say about the once glorious athlete, “Yeah, I think he’s stupid for saying this, after he passed all of his drug test he ever took.” He continued on by saying, “I think he’s planning something. He might be writing a book or something on how he evaded all of the tests, and he’ll make even more money than he did before.”  After admitting this on TV, does this make a plausible case for another investigation or will they leave him alone? CJ Maholland said, “I think he get’s what he get’s, he should have never admitted that he did it, but he did, so I think he will do a book on how he beat the test and how his life has changed now that he admitted it and make a butt load of money doing so.” But the biggest question is why Lance Armstrong admitted this right here and now. Is there a plan for him to do something special? We will just have to find out, because the future holds the answers we are looking for even if we don’t know it yet. 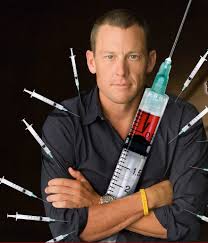 Matt Mastrogiovanni - Jun 9, 2014 0
It was like déjà vu for the New York Rangers on Saturday night, as they once again gave up a two goal lead and...

The Top 5 Quarterbacks in the NFL