For the second time, Stella McCartney will be launching two new lingerie items this October in support of Breast Cancer Awareness Month. One set is called the ‘Alina Playing;’ and will consist of a deep fuchsia soft cup bra, a contour plunge bra, and a bikini brief. While the other called the ‘Louise Listening Bra,’ named after her mother, is a light rose recovery bra for post double mastectomies. Both sets will be available for purchase on Oct. 1, at Stellamccartney.com and retails from $55 to $125. The inspiration behind the new lingerie hits home for McCartney because her mother died of Breast Cancer i 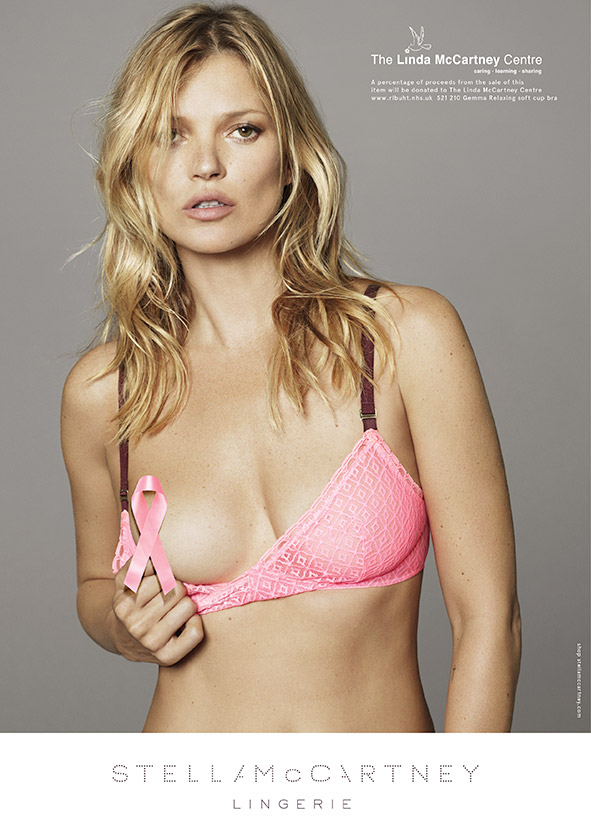 n 1998. She wants females to be aware of breast caner or have a comfortable recovery, while still feeling confident and stylish.

McCartney decided to kick the initial campaign off with model vet, Kate Moss. Moss was photographed in the pink ‘Alina Playing’ soft cup bra with a pink breast cancer ribbon covering one nipple. Moss’s involvement will appeal to women with families since she is a mother and wife herself. Stella McCartney stated that, “Women are an integral part of the family unit, they keep and hold families together and are a source of strength.” Her effort is to remind women to stay aware and healthy, because breast cancer affects the entire family.

Another popular model who was also photographed in the ‘Alina Playing’ is Cara Delevingne. Delevingne is photographed in the same soft cup bra as Moss. McCartney said, “We were so thrilled when Cara said yes to this project because she represents a generation of young women that we are really trying to reach and catch the attention of.” Her go al is to reach younger women who may also be a victim to breast cancer; as well as, letting people know that preventing is the most positive approach.

A percentage of the proceeds from the ‘Alina Playing’ will be given to the Linda McCartney Centre in Liverpool, UK. The proceeds will help the foundation buy a new Mammography, so they can offer patients early diagnosis, treatment and recovery. As for the ‘Louise Listening’ Bra, all proceeds are going to the Hello Beautiful Foundation, which aims to strip the negative energy associated with breast cancer.

What is Christian Nationalism?