On Wednesday at 3 p.m. the National Hockey League’s trade deadline ended with some big names moving to different teams. One of the biggest surprises was that Vancouver’s Ryan Kesler, who reportedly wanted to be traded, was not. However, long time Vancouver goalie Roberto Luongo finally was traded. After eight seasons as a Canucks goalie Luongo was traded to the Florida Panthers in exchange for Panthers goalie Jacob Markstrom and forward Sean Matthias. Vancouver forward Steven Anthony was also sent to Florida as part of the deal. Luongo actually played for Florida at the start of his career so he is back where he began.

Another notable trade happened Feb. 28 involving goalie Ryan Miller. Miller was a Buffalo Sabre his whole career until that day when we became a part of the St. Louis Blues. The Blues gave up goaltender Jaroslav Halak, forwards Chris Stewart and William Carrier, plus two high picks in upcoming drafts. Buffalo forward Steve Ott was the other component of Buffalo’s “package” to St. Louis. Halak was later traded from the Sabres to the Washington Capitals before the 3 p.m. deadline.

The Tampa Bay Lightning were also sellers before the deadline. Captain Martin St. Louis was dealt to the New York Rangers for forward Ryan Callahan. St. Louis had also been with Tampa Bay his whole career but he thought it was time for a change. Another New York team that shipped out a player was the Islanders. Forward Thomas Vanek went to the Montreal Canadiens in exchange for forward Sebastian Collberg and a conditional second round pick in the upcoming 2014 draft. Vanek was reportedly wanting to be traded even before the Olympic break.

The Philadelphia Flyers gave up a 2014 third round draft pick, a 2015 second round pick, and AHL forward Matt Mangene for defenseman Andrew MacDonald from the New York Islanders. Also, defenseman Andrej Meszaros was sent to the Boston Bruins for a 2014 third round pick. Trading Meszaros freed up just over six million dollars of cap space for the Flyers which gives them some wiggle room for the upcoming free agency if they choose to sign any new players. Overall, it was sort of a quiet deadline for Philadelphia.

In the end, a lot of moves were made during the NHL trade deadline. Some players will be seeing different teams play against them while wearing different jerseys too. Wherever they ended up they will hopefully make a positive impact. For a complete list of trades visit this link: http://www.nhl.com/ice/news.htm?id=675589&navid=nhl:topheads 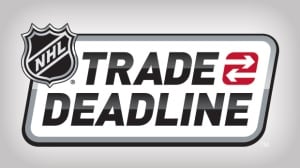 Gift Ideas for Your Sweet Heart!