Mona Lisa has some new competition.

A portrait of a young woman, thought to be from the 19th century and by a German artist, is now being confirmed by art experts as a true Leonardo da Vinci. Two years ago, this painting sold for a mere $19,000 to a Swiss collector from the Ganz Gallery in New York. Today, it is valued at more than $150 million. 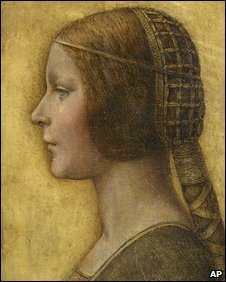 The 13-by-9-inch painting is now being dubbed La Bella Principessa or The Beautiful Princess. It portrays a profile of a young aristocratic Milanese woman, drawn with pen, chalk and ink on an animal skin known as vellum. The portrait is unsigned and based on its style, it has been dated to 1485-1490, placing it at a time when Leonardo (1452-1519) was living in Milan.

So how do art experts know this was painted by the Italian master of art, Leonardo da Vinci?

A 500-year-old fingerprint and palm print were discovered on the portrait that matches a fingerprint found on Leonardo’s “St. Jerome” in the Vatican. The print on “St. Jerome” has to be from da Vinci because this painting was done before he had any outside help in his studio. Technical, stylistic and material composition evidence, including carbon dating, had art experts believing as early as last year that they had found another work by the creator of the “Mona Lisa.” It was not uncommon for da Vinci to use his hands when painting and many of his fingerprints have been found on his artwork.

Kate Ganz, the original owner of the portrait who sold it for $19,000, still doesn’t believe that it is a genuine da Vinci. “Nothing that I have seen or read in the past two years has changed my mind. I do not believe that this drawing is by Leonardo da Vinci,” Ganz stated on Wednesday.

If experts are correct, La Bella Principessa will be the first major work by Leonardo to be identified in 100 years.

Students Support a Race for a Cure

Connor Showalter - Oct 29, 2009 0
The 7th Annual Breast Cancer 5K Race/Walk raised about $10,000 for the Pennsylania Breast Cancer Coalition (PABCC), as about 400 participants took part in the race on a sunny afternoon on Sunday, Oct. 25 at the Student Recreation Center.

Heisman Falls into the Hands of Oregon’s Marcus Mariota

The Phenomenal Life of Whitney Houston