It’s not often that college students are able to see a Grammy-winning artist perform in a smaller, more intimate venue. On Sunday night, Bloomsburg students and town residents were fortunate enough to have that privilege when Luciana Souza, accompanied by renowned guitarist Romero Lubambo, played Kenneth S. Gross Auditorium in Carver Hall.

Although Souza was the top-billed artist, the show was as much about Lubambo’s flawless guitar playing as it was about Souza’s smooth vocals and percussion. The duo was musically inseparable, displaying a chemistry they have developed after almost 20 years of playing and touring together.

Souza’s vocals were most impressive during their slower pieces, which gave her a chance to hold out flawless vibratos during moments of emphasis. She was even able to perform sections of some songs with no accompaniment.  Her voice visibly impressed members of the audience as she delivered powerful melodies in both Portuguese and English. 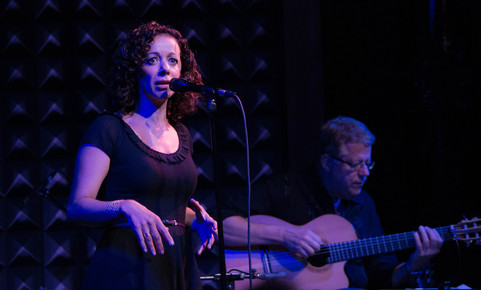 By contrast, Lubambo’s abilities were showcased during the songs with a quicker tempo. He effortlessly played complex chord progressions and jaw-dropping solos that would inspire any onlooker to start listening to more jazz. His playing was fast and technical, but also clean and precise. The audience was clearly in the presence of a world class guitarist.

Although the music was incredible, Souza’s and Romero’s stage presence provided for some great moments between songs. While Lubambo would tune or adjust his guitar, which he did several times throughout the night, Souza would explain the meanings behind the songs they were singing. This was particularly helpful to an American audience, since many of the songs were sung in Portuguese. Souza discussed elements of Brazilian culture in the music, and had some funny anecdotes about her travels.

Being so close to the performers in a smaller venue gave the night a casual feel, and the artists appeared very comfortable and relaxed on stage. It was obvious that they are very passionate about music, which translated well into the performance.

After the performance, Souza and Lubambo remained on stage as the lights came on. They stayed for an additional 20 minutes to answer any questions from the audience, share stories, and pose for pictures. It was nice to find that the artists are not only extraordinarily talented, but also very kind and personable. We are lucky to have such amazing musicians visit our campus and perform for us.

The next Celebrity Artist Series performance will be on April 5, when we will be visited by Dala, a Canadian folk duo. If they are anything like the other members of the series, their performance will be outstanding. At $14 for Bloomsburg students, it’s an affordable show you won’t want to miss.

The Fall Semester Has Begun

Ballroom With a Twist

Cailley Breckinridge - Oct 29, 2013 0
Celebrity Artist series brings dance and music to the stage in Ballroom With A Twist.

Red Band Society: A Light and Cheesy Take on a Dark...

Dunder Mifflinites are Worth Their Weight in Gold