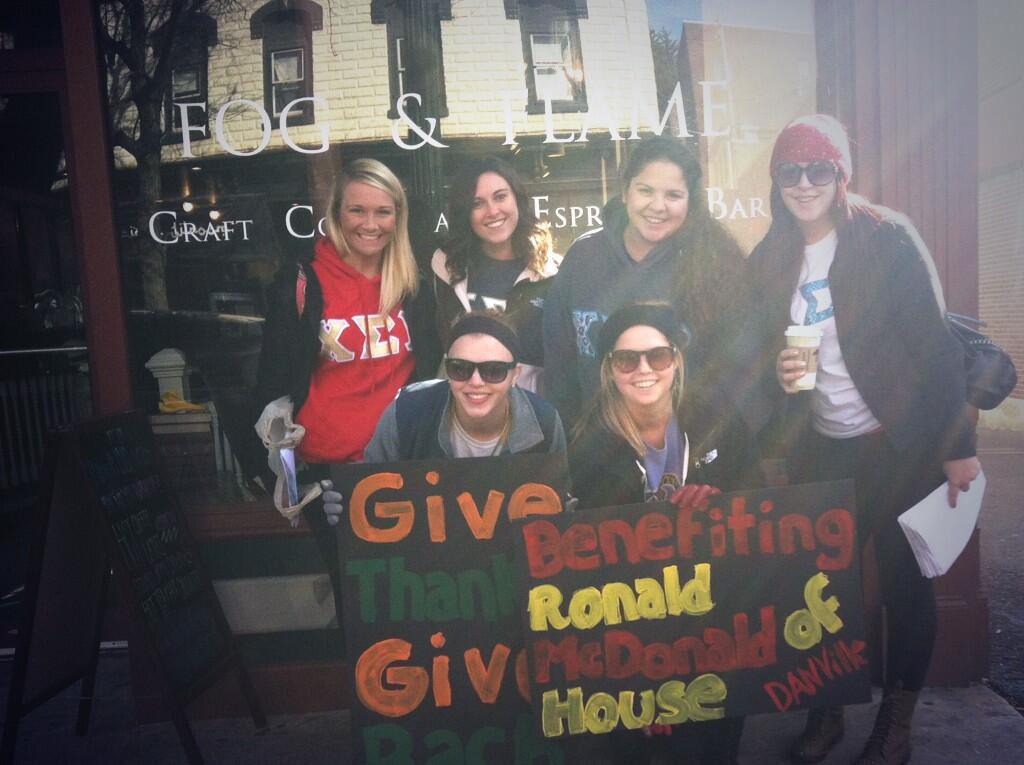 The Day of Sales was held on Nov. 9 in Downtown Bloomsburg to benefit the Ronald McDonald House of Danville.  The participating stores donated a percentage of their sales for the day.  The stores were as follows: B Green Loft, Lil’ Kids Stuff, Little Fashionz LLC, and Fog and Flame Cafe.  Flyers were passed out on the day of the fundraiser for an Applebee’s night which also benifited the House.  Volunteers from the local sorority, Chi Sigma Rho, were out in full force to help promote the “Give Thanks and Give Back” campaign.  The volunteers not only passed out flyers but collected donations as well as directed costumers to participating stores.

Kendall Mascia, a senior at Bloomsburg University and member of Chi Sigma Rho, was present at the Day of Sales.  Stationed outside of Fog and Flame Cafe, Kendall helped costumers and talked about the Ronald McDonald House of Danville.  “I love when we (Chi Sigma Rho) have the opportunity to work with the Ronald McDonald House of Danville.  They are so nice and it really is a great organization.  We have gone to the House often to cook meals for the guests, so it was exciting to be apart of the campaign in Bloomsburg benefitting them.”  Other volunteers agreed with Kendall also citing that Chi Sigma Rho’s philanthrophy is Children with Cancer and their past involvement with the House.

Owners of participating stores were equally excited with the opportunity to help the Ronald McDonald House of Danville as well as promote local businesses.  Fog and Flame co-owner, Josh Bumgardener, revealed that there was a steady flow of costumers throughout the day due to the cold weather and volunteers with signs directing people inside.  Fog and Flame Cafe donated the most with a donation over $70.

Volunteers also were able to collect $70 in donations from passerbys in the community.  The “Give Thanks and Give Back” campaign for the Bloomsburg Day of Sales was able to raise a total of $212.82, as well as a generous food donation from the sorority, Alpha Sigma Alpha.  The Ronald McDonald House of Danville thanks the Bloomsburg community for their donations and enjoyed working with everyone involved!

The 10th Annual BU Drag Show Happened This Past Weekend

Matt Mastrogiovanni - Oct 16, 2014 0
Tuesday night’s Flyers loss to the Ducks was a tough one as they dropped a 4-3 decision in a shootout. It marked the second...

Episode 2: Are you feelin’ this?