For the first time since 2011 the Flyers beat the Rangers in Madison Square Garden in order to even their playoff series to 1-1. Sunday afternoon was a great win for the Flyers as they finally showed up to play after their dismal Game 1 on Thursday.

New York opened up the scoring in under five minutes during the first period when Martin St. Louis potted a goal on Ray Emery. Things got worse for Philadelphia as the Rangers made the score 2-0 after a power play goal from Benoit Pouliot. It was beginning to look as if the Flyers were in major trouble but thanks to Jake Voracek they got on the board. The Rangers’ lead was 2-1 going into the second period.

The Flyers’ fortune took a positive turn as they opened the second period strong. An early power play for the team made way for Jason Akeson to score his first career playoff goal and tie the game 2-2. One could tell that the Flyers had come alive and were ready to play some hockey as things got better from there. Just under 10 minutes into the period the Flyers struck again with a goal from defenseman Luke Schenn. A former Maple Leaf, Schenn had played in just his second career playoff game and had his first career playoff goal. The Flyers had come to play.

The third period was nothing short of a stellar period by the Flyers as goalie Ray Emery stopped all shots that came his way. Philadelphia’s defense locked it down even though a lot of the final stanza was played in the Rangers’ end of the ice. In the final minute of play, Wayne Simmonds sealed the deal for the Flyers as he made a great individual effort to score an empty net goal to propel the team to a 4-2 victory plus, a tied series. Emery, the Flyer goaltender, stopped 29 consecutive shots after New York scored their two goals and played a spectacular game. The Flyers head back to Philadelphia on Tuesday night to start their portion of home ice for the series. Look for another great game between each team. For full a full game recap, click here. 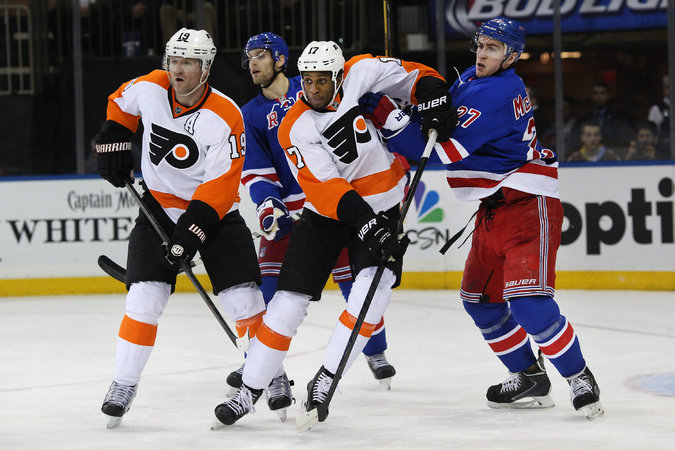 Voice Features - Nov 20, 2008 0
This Thanksgiving, we think you should try and make something special that your family will enjoy, being that they don’t get to see you six months out of the year.

Bloomsburg’s First Baseman Kicked Off Of Team For Controversial Tweet