Every week of the 2011 NFL season I will be putting out an article of the top “starts” and “sits” for the upcoming week in fantasy football. Keep in mind that no one can predict what will happen on Sunday’s and I encourage everyone to make their own decisions, but hopefully I can provide some insight. Players I deem as good “starts” for the week I think will have a better than projected week and should find a way into your starting lineup. On the other hand players I name as “sits” I personally would rather find room on my bench in favor of someone else. Of course when it comes down to week to week decisions you always start your studs, and just because I think Matt Ryan is “sit” worthy doesn’t mean you necessarily have someone worth starting over him. As always feel free to leave comments giving your opinions of who you think should make the list every week. Take it for what it is worth and good luck this week.

QBs
-Rex Grossman(start): Chances are Rex Grossman is not on your fantasy team. Chances are he’s not on any team in your league.  However, this week he should be. Grossman comes off a solid performance against the Giants throwing for 300 yards and 2 TDs. Some may argue that the Giants secondary is weakened with injury, which is true. But the Redskins play the Cardinals this week who are coming off a game where they allowed rookie Cam Newton to put up the third most points by a QB for week 1. It certainly isn’t a sexy start but Grossman is worth a look.

-Matthew Stafford(start): Listed by many as a breakout candidate, Matthew Stafford had a promising week one start throwing for 3 touchdowns. This week Stafford takes on the Chiefs who lost their biggest playmaker on defense, Eric Berry, to a torn ACL. Not only is Berry the biggest playmaker for the team but he is also the most integral cog to the Chiefs secondary, that already let Ryan Fitzpatrick put up huge numbers last week. There is also one thing Matthew Stafford has that Ryan Fitzpatrick doesn’t that nearly guarantees solid numbers for Stafford. Calvin Johnson, heard of him?

-Matt Ryan(sit): Going into the year the typical run heavy Falcons were supposed to open up their playbook and become the next explosive offense in the league. Unfortunately that didn’t quite pan out in week one. At numerous times the offense as a whole looked out of sync, and Ryan in general looked scared to take a shot down field. This week Ryan has to face the Eagles secondary which boasts Nnamdi Asomughua, Dominque Rodgers-Cromartie, and Asante Samuel. Look for the Falcons to get behind early in the game and Ryan to struggle to move the ball without making costly mistakes.

-Cam Newton(sit): Cam Newton is in an incredible athlete and to do what he accomplished last weekend was unbelievable. Owners should temper expectations this week, as much of his performance seemed to be due to the Cardinals secondary making him look like Joe Montana. Newton does face a Packers secondary who allowed Drew Brees to throw for over 400 yards last week. But let’s be honest, Newton has a lot more to prove before he can be compared to the Saints gunslinger.

RBs
-Darren Sproles(start): Darren Sproles is a nightmare for defenses. An absolute wake up screaming like a five year old girl, drenched in your own sweat, nightmare. Just ask AJ Hawk who got toyed with by Sproles first catch last week that went for about 30 yards. Not only is Sproles nearly impossible to match up with, but his versatility in the Saints offense gives him significant value. Last week Sproles recorded 9 total touches and with Marques Colston out this week double digit touches are likely. Sproles is a must start in PPR (point per reception) leagues.

-Mike Tolbert(start): Mike Tolbert is an animal. At 5’9”, 243 pounds Tolbert runs through defenders like a wrecking ball. Last week he managed to find pay dirt 3 times. Now while expecting similar production is unrealistic the fact that Tolbert saw 9 catches in the passing game is where his true value lies. Anyone who Phillip Rivers is throwing the ball to in double digits is likely in for a big day, and it wasn’t like the Patriots secondary showed anyone anything Monday night against the Dolphins that would scare owners away.

-Arian Foster(sit): I admit this is bold and chances are you have no option but to start Foster. His situation seems to be setting up for a potential fantasy letdown. Foster did return to practice on Monday, but coach Gary Kubiak stated that he wasn’t even sure if Foster would be able to practice again on Wednesday. Running backs and hamstring injuries are a terrible combo, and the possibility of Foster getting the start and then only being used sparingly or re-aggravating the injury is a huge possibility. Be sure to keep your eyes on all injury reports and word on Foster coming out of the Texans facility before plugging him right back into your lineup.

-Chris Johnson(sit): As if I wasn’t asking to be burned enough with Foster, I feel just as bad about Chris Johnson going into this week. The measly 24 yards that Johnson amassed last week isn’t necessarily what is scary. Only 9 carries is what should worry owners, and didn’t it look like Johnson was running like a man who just got paid and didn’t seem to care too much? As if the situation couldn’t get worse, the Titans play the Ravens this week, arguably one of the best run defenses in the league. Chris Johnson’s week one showing legitimately concerns me. Until he shows something different I am hesitant to call him a must start.

WRs
-Dez Bryant(start): Dez Bryant had a big game on Sunday night and in reality all of his production came on the first drive. Shortly after that, Bryant reportedly bruised his quad on a punt return and then suffered cramps throughout the rest of the night that literally left him hobbling down field for the remainder of the game. The Cowboys have stated that they will limit Bryant on punt/kick return duties, which as a fantasy owner is a plus. Can you imagine what Dez Bryant could have done Sunday night if he had the agility and explosion he showed before getting banged up? This dude is a physical freak and Tony Romo seems to like finding him.

-Devery Henderson(start): Devery Henderson had a nice 100 yard receiving game against the Packers, but let’s be honest nearly the whole team did. The reason Henderson is a start this week is Marques Colston will be out 4-6 weeks with an injured collar bone. Not only is Henderson the big play guy in the Saints offense, but unknown to many, he was actually the receiver lining up last week across from Colston in 2 receiver sets, not Robert Meachem. As explosive as this Saints offense is, combined with limited options this week with Colston and Lance Moore both likely out, Henderson should have no problem being productive.

-Kenny Britt(sit): Kenny Britt had a huge Sunday last week. Those who watched the game however, will note that the 80 yards and a TD that he accumulated came off one fluke play that in reality should have ended either with a pick or Britt lying on the ground gasping for air. On top of that Jags cornerback, Rashean Mathis failed to stay with Britt play after play having a miserable game. Britt’s quarterback is still Matt Hasselbeck, and against the Ravens much more formidable secondary, expect Britt to struggle.

-Steve Smith(sit): Steve Smith also had a monster game last week recording 8 catches for 178 yards and 2 TDs. To me this seemed fluky. Keep in mind Smith came off a terrible year last season, had only one catch in the preseason with Newton as his quarterback, and the Panthers really failed to get their run game flowing last week. The Panthers will try to get DeAngelo Williams back to form and don’t expect the Packers defense to allow Smith the type of space he had to work with against Arizona last week.

TEs
-Jermaine Gresham(start): Jermaine Gresham had a solid fantasy outing and what most owners will fail to see is that nearly all of that production came with Andy Dalton who left the game early after injuring his wrist. Gresham’s size and enormous hands make him a lethal red zone weapon. With the injury reports on Dalton being positive, expect Gresham to put in another solid fantasy performance.

-Owen Daniels(start): After Owen Daniels week one stat line of one catch for 12 yards, owners are likely to avoid him. Last week the Texans got up so early in the game they really had no need to throw the ball a whole lot and continued just to pound through their run game. With Texans wide receiver Kevin Walter being out with a broken shoulder, Daniel’s targets should increase. Not only that, but the Texans also play the Dolphins this week who didn’t only allow one tight end to have a monster game, they allowed two.

-Scott Chandler(sit): Scott Chandler will likely be a hot pickup this week on the waiver wire, but in all reality he probably shouldn’t be, at least not yet. Chandler did have nice day with 5 catches for 63 yards and 2 touchdowns but owners should keep in mind that Chandler only ever recorded one NFL catch before that game. If Chandler can keep the red zone targets coming he might be able to produce, but his week to week consistency is bound to be limited.

-Ed Dickson(sit): Similar to Chandler, Ed Dickson’s value relies heavily on his ability to find the end zone. This may totally be a gut call, but is seems unlikely that he will find the end zone consistently. With Anquan Boldin being attractive red zone target, and Ray Rice receiving numerous looks both on the ground and in the passing game when the Ravens get close, I am not quite sure there is enough to go around for Dickson week in and week out.

D/STs
-Steelers(start): The Steelers, the number one fantasy defense taken this year, had a disappointing week against the Ravens.  They were literally embarrassed at times. This group is too good and way too vicious to allow another slip up like that. This week the Steelers line up across from the Seattle Seahawks, a perfect matchup for the defense to rebound. It is highly unlikely Marshawn Lynch will be able to produce against this defense, and in reality Tavaris Jackson isn’t scaring anyone. On top of that it is always easier to play defense in your home stadium with the crowd behind you.

-Bears (sit): The Bears defense has a great fantasy day last week turning the ball over 3 times and finding the end zone. Unfortunately it takes a special defense to put up numbers like that in back to back weeks. It also doesn’t help that the Bears have to travel and play in the Superdome against the Saints who made the stellar Packers defense look less than mediocre on numerous occasions last week.  The Bears could also be without linebacker Brian Urlacher who’s mother passed away earlier this week. This matchup is bound to bring disappointment for many owners. 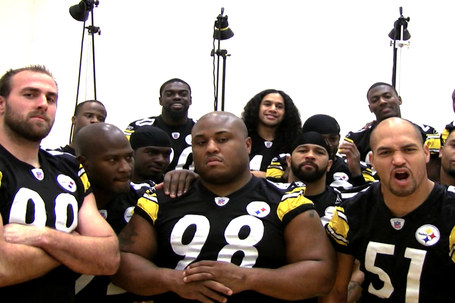 Jared Frost - Dec 7, 2021 0
The Dec. 6 MNF game between the Buffalo Bills and New England patriots was anything but ordinary. A temperature of 23-degrees, average winds of...

4 Tricks for Getting a Head Start on Your New Year’s...

The Return of ‘Low Expectations’ Podcast!