Every week of the 2011 NFL season I will be putting out an article of the top “starts” and “sits” for the upcoming week in fantasy football.  Keep in mind that no one can predict what will happen on Sunday’s and I encourage everyone to make their own decisions, but hopefully I can provide some insight.  Players I deem as good “starts” for the week I think will have a better than projected week and should find a way into your starting lineup.  On the other hand players I name as “sits” I personally would rather find room on my bench in favor of someone else.  Of course when it comes down to week to week decisions you always start your studs, and just because I think BenJarvus Green-Ellis is “sit” worthy doesn’t mean you necessarily have someone worth starting over him.  Take it for what it is worth and good luck this week.

–Eli Manning(start):  In real life, Eli Manning has been pretty atrocious at the quarterback position to start the year.  Through five games and has tallied 9 turnovers which have resulted in their unimpressive start as a team.  Fortunately for fantasy owners, real life play doesn’t always translate directly to fantasy.  Despite the high amount of interceptions and fumbles Eli has still been pretty productive from a fantasy viewpoint.  With the emergence of Victor Cruz and an unintimidating Buffalo secondary, owners should expect turnovers but the yardage and touchdown numbers will still result in a good day for Manning.

–Colt McCoy(start):  Colt McCoy hasn’t had any big games this year but he has been relatively consistent.  Averaging just under 15 fantasy points a game, McCoy offers a low risk/low reward option for those owners running into bye week troubles.  This week McCoy and the Browns will travel to Oakland to take on the Raiders pass defense that is allowing an average of two touchdowns a game.  Coming off a bye expect McCoy and his offense to be in sync, making him a viable option at quarterback this week.

–Matt Schaub(sit):   Matt Schaub has been hit or miss this year for fantasy owners but this matchup isn’t shaping up well for him.  Traveling to Baltimore without the presence of wide receiver Andre Johnson, Schaub will be hard pressed to find holes in a Ravens secondary that is allowing the least fantasy points to opposing quarterbacks this year.  Not to mention the Texans showed their uncertainty in their receiving situation earlier this week by trading for 37 year old receiver, Derrick Mason.  Unlike Schaub who got banged up last week, the Ravens are coming off a bye and will be well rested and schemed in stopping the Texans offense.

–Ryan Fitzpatrick(sit):  Ryan Fitzpatrick started the year out as arguably the hottest quarterback in the league but has slowed down significantly over the past two weeks.  In weeks 4 and 5 Fitzpatrick didn’t even put up double digit fantasy points.  Fred Jackson has continued to run well which has taken away some success from Fitzpatrick.  More troubling is the fact that teams have begun to figure out how to limit the deep play by the Bills which has forced Fitzpatrick to stick to short route receivers.  This week the Bills take on the Giants who have a relatively good secondary allowing the 7th least fantasy points to quarterbacks on the year.

–Peyton Hillis(start): Peyton Hillis has started out the year slow, showing signs of a possible “Madden Curse.”  Going into the Brown’s bye last week, Hillis had yet to eclipse 200 yards rushing.   A lot of press came out last week stating that Hillis was told to sit by his agent due to illness.  With an extra week to regain health, Hillis should be focused to take on the weak run defense of the Oakland Raiders.  With possible rumors of a trade and contract negotiations still lingering, Hillis really has something to run for. 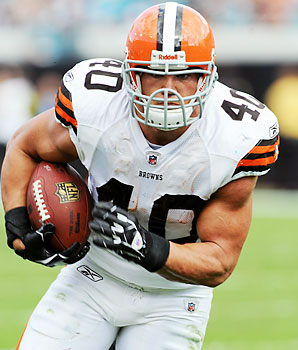 –Daniel Thomas(start):  In week three Daniel Thomas put on a breakout performance finally propelling himself ahead of Reggie Bush in the Dolphins backfield.  Unfortunately he missed the following week due to a hamstring injury.  With the Dolphins coming off their bye week, Thomas has had an extra week to get healthy and begin practicing again.  If Thomas is healthy and good to go on Sunday he should have no problem running through the Jets defense who have absolutely been thrashed by the run the past three weeks giving up over 450 yards and 6 touchdowns.  Be sure to check injury reports throughout the week.

–Jahvid Best(sit):  Jahvid Best had a huge game on Monday night but it should be noted that much of his production came off one 88 yard touchdown run.  Up until that point he had really be unimpressive.  This week the Lions play the 49ers who have allowed the least points to fantasy running backs this season.  Expect Best to return to his normal level of production where most of his value is found in the passing game.

–BenJarvus Green-Ellis(sit):  BenJarvus Green-Ellis is in a similar situation being that he came off a huge week rushing for 136 yards and 2 touchdowns.  Much of this was due to the fact that he carried the ball a total of 27 times which is unlikely for any running back, but even more uncharacteristic for a running back in a Bill Belichick offense.  With Danny Woodhead expected to return to the mix, and the Patriots facing the Dallas defense that has yet to allow a rusher to go over 65 yards in a game, BJGE is likely to struggle.

–Dez Bryant(start):  Dez Bryant has been hindered by a quad injury since week one of the regular season that has left him hobbling at times and unable to be on the field for numerous offensive snaps.  On top of that, Bryant has been without Miles Austin which means he has been matched up with the number one corner.  With the bye week allowing Bryant and Austin to heal, they will both return to the field healthy against the Patriots this week.  If finally being fully healthy wasn’t enough, the Patriots defense has also given up the most points to fantasy wide receivers this year.

–Anquan Boldin(start):  Other than week four when Anquan Boldin took a visit to Revis Island, the Ravens top receiver has been pretty productive and reliable.  This week Boldin gets the advantage of coming off of a bye week.  He also gets the benefit of his quarterback, Joe Flacco, going up against a Texans defense without pass rusher Mario Williams.  Flacco should have plenty of time to read the defense and find his main man in Anquan Boldin.

–Hines Ward(sit):  Hines Ward caught 7 passes for 54 yards and two touchdowns last week in the Steelers win.  Fantasy owners should be sure to take this as a blip on the radar.  Before last week Ward had only totaled 13 catches for roughly 125 yards.  Much of his production could also be credited to the absence of running back Rashard Mendenhall.  Expect Ward to return to his normal level of production and not be fantasy relevant .

–DeSean Jackson(sit):  For fantasy purposes DeSean Jackson is boom or bust.  Jackson is a big play receiver that solely relies on his ability to break a long one for a touchdown.  The Eagles play the Redskins this week who will remember all too well what DeSean Jackson did to them last year.  It’s a gut call, but I would expect Laron Landry and the rest of the Redskins defense to make sure that the last thing DeSean Jackson does is have a big day.

–Vernon Davis(start):  In the past three weeks Vernon Davis finally found his way back into the 49ers offense.  He has recorded three touchdowns through the past three games, and his quarterback Alex Smith has continued to improve.  This week the 49ers take on the Detriot Lions who have allowed a touchdown to a tight end in each of their last three games.  Fantasy owners should expect that streak to continue as Davis has clearly returned to form.

– Jimmy Graham(start):  Jimmy Graham has started his breakout season with a bang.  He has been heavily involved in the Saints offense leading the entire team in targets, receptions, yards, and receiving touchdowns.  Graham and Drew Brees clearly have developed a great connection and this young tight end’s athletic talent should have no issue strengthening that connection this week against the Tampa Bay Buccaneers.

–Rob Gronkowski(sit):  After absolutely exploding in the first three weeks of the season, teams have caught on and realized how big of a factor Gronkowski is down in the red zone.  Teams continue to double cover and bracket Gronkowski, and the return of Aaron Hernandez will take away targets.  After two mediocre weeks from Gronkowski, it is clear that one of these Patriot tight ends will have a big game it is just hard to determine who week to week.

–Dustin Keller(sit):  Dustin Keller did well in the first two weeks of the season but since then his production has dropped and he has failed to find the end zone.  This lack of success could be blamed on two things, one being the poor play of Mark Sanchez.  The bigger factor in Keller’s absence in the passing game recently probably lies with the teams shift towards running the ball.  With only one 3 receptions for 19 yards in the past two weeks it seems as though they are using the big tight end to block and hopefully create holes for the Jets run game.

–Packers(start): The Packers defense is not the same stellar unit that took them to the Super Bowl last year, but they are still very good.  The Packers defense has put up at least 6 fantasy points a week, and currently sits as the 5th best fantasy defense overall.  This week the Packers line up across the Rams who have allowed the most fantasy points to opposing defenses this season.  If you need to hear that again, the Rams have allowed opposing fantasy defense to average slightly over 15 fantasy points a week, that’s huge.

–Giants(sit):   The Giants defense has struggled to fill the holes in their lineup from week to week.  Individually the Giants defense is very good when healthy but they have not been able to put it all together yet this year.  Unfortunately the match up against the Bills offense does not bode well for the Giants considering the most fantasy points a defense scored against Buffalo this year is one point.

MLB finds itself ‘stuck’ due to cheaters

Tim Tebow is back in the NFL (Sorta)

Joshua Evans - Jul 25, 2021 0
Cleveland's MLB team released a statement Friday morning to announce it will change its name from Indians to Guardians. I understand why many sports franchises...

Ashley Scioli - Mar 18, 2009 0
From now until April 10th at 4:00 p.m., you can nominate your favorite professor for the Outstanding Teaching Award, sponsored by the Teaching and Learning Enhancement Center (TALE).

Presidents and their Pets