The musical adaptation of Green Day’s multi-platinum album followed three friends who were separated by their different walks of life: a rebellious dreamer, a soldier, and a teen father stuck in suburbia.

If the musical could be described in one phrase, it would probably be “in-your-face”. The show started with a busy backdrop of plasma screen TVs playing short bursts of various television and news stations. After a bright kick from the strobe lights, the cast flew out on stage and broke out into “American Idiot”. The main characters were introduced, which flowed right into the second track, “Jesus of Suburbia”. 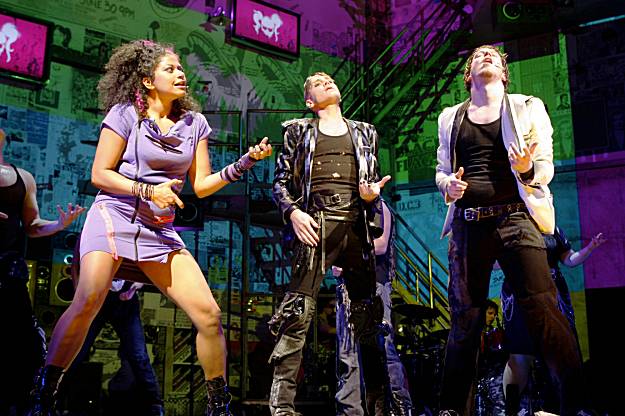 Other notable songs included the hits “Holiday”, “Boulevard of Broken Dreams”, and “Wake Me Up When September Ends”, as well as the frenzied “St. Jimmy” and “She’s a Rebel”. Newer tracks from the album 21st Century Breakdown were also thrown into the mix. At the very end, the entire cast came out armed with acoustic guitars to collectively play “Time of Your Life”.

Many issues facing the youth of America today were tackled, including drug abuse, the wars in the Middle East, and the effects of teen pregnancy. No one was afraid to be rough around the edges; graphic scenes of heroin use, sex, war, and profanity filled the stage. However, this was only meant to drive home Green Day’s original message- that in some way, we are all American Idiots.

Although the plot was a bit thin, the adaptations of the songs and choreography were stellar. It tied the whole album together with a storyline and carried the feeling of a real rock concert with a little something extra. Students were abuzz when leaving Haas, and the rocking spectacle was a great way to spend a Friday night.

How to (almost) Win an Election in 36 hours

Stormi Steel- A Place for Tattoos, Piercings, and Fun!